Tagg Romney Are YOU Friends with Austin Barbour.. I Was Told That The Florida Trucking Company That Bullied Me in 2010 Was Linked to the Barbour Presidential Campaign. Someone Told Me to Have Ask for An AUDIT of ALL Mississippi Land Deals That Involve the NISSAN Canton Plant and Also the Tennessee Facilities. I Was Told the Decherd Plant Property Changes Will Be INTERESTING.... I Smell Lamar Alexander Getting Into the Mix?

Message for Grover Norquist: Call me-  Sharyn Bovat 615-944-7599 about the email I put a copy of on this blog.  It says NOTHING about any views or opinions.  Hope to attend one of your meeting soon.  Maybe the week of the 28th?

Haley Barbour did "sleazy deals" with NISSAN and green energy programs.  Mark Silverman the Ben Bradllee winner knew this.
He says I "compartmentalize" political operatives and I do… you have to since YES!! They're all republican BUT they do different deals.

What happened to me was between Haley Barbour and Sal Russo.
I do NOT believe that Karl Rove had anything to do with this.
In fact the Grover Norquist people were nice to me- I could be wrong but my gut says it was ALL Sal Russo with a nervous Haley Barbour.

look at emails below.

Haley Barbour at the RNC convention spoke at a party loaded with Sal Russo bloggers.  I have proof that some of them are responsible for bullying I received.

Sal russo is part of the jim demint Michelin group ....   He worjed
fie reagan then He got lots of CIA communications contracts ...FYI
Even though russo fights against rove and gillespie they still (in a
way) play on the same team.   Barbour plays in both.

Just to show you HOW WEIRD my RNC conventions experience was.. 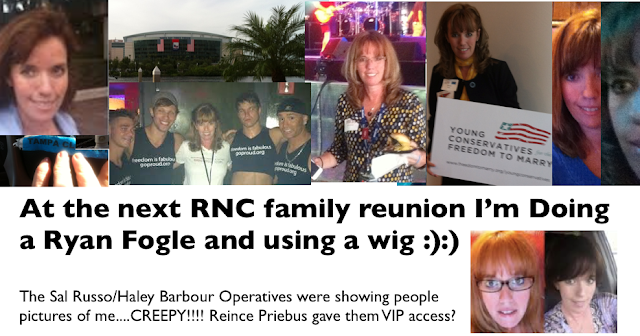 This is the email I got to the Grover Norquist thing…*********************
this group is the elite…a guy from the group had drinks with me on Romney island. Near the Westin.   A woman had to take me their since I did not have credentials to be on Romney Island. it was really bizarre… I parked my car at the Tampa club and I walked over to the Marriot and a car pulled up.

People would forward me stuff…..weird.

Dear Friends and Colleagues,
Just a reminder there is no Wednesday Meeting in Washington, DC this week. We are hosting the National Center Right Meeting in Tampa, FL.
If you would like to present at the Wednesday Meeting in Washington, DC on September 5th, please email me.
Candice N. Boyer
Director of Scheduling and Outreach
Americans for Tax Reform
722 12th Street, NW | 4th Floor | Washington D.C. 20005
Ph. 202-785-0266 | Email: cboyer@atr.org
This message may contain confidential and/or proprietary information, and is intended only for the person / entity to whom it was originally addressed. Any use by others is prohibited. The content of this message may contain private views and opinions which do not constitute a formal disclosure or commitment unless specifically stated.