Reid Weingarten: Now that the Jesse Jackson Trial/Sentencing is Done... Lunch? Let Me Know When to Be in DC. I've Got LOTS for YOUR Independent Investigation. I Bet Tom Ingram is Pooping his Pants. Here's An Email I Sent Him Today. I'm Working On Linking Vitol Energy to Nazi Gold. Maybe the Jews That Don't Profit From Iran Will Want There Dead Ancestors Money Back? The Haslam Family Makes Money From Ex Nazi's That Profited AFTER WWII... I Think That's CREEPY... Someone Tell Mike Loya to Call Me If I'm Wrong About Vitol Energy. Thanks:):) Oops Did I Mention That in Tampa I Got to Sit With Some of Mike Loya's Friends from the Houston Chamber at the Ann Romney Luncheon. It Was a LOT of Fun.... The Hispanic Republicans Gave Me a Bottle of Tequila:):) 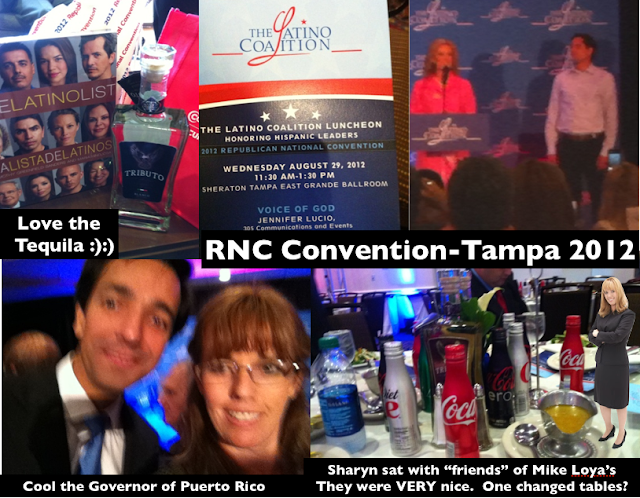 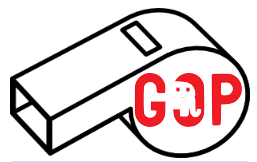 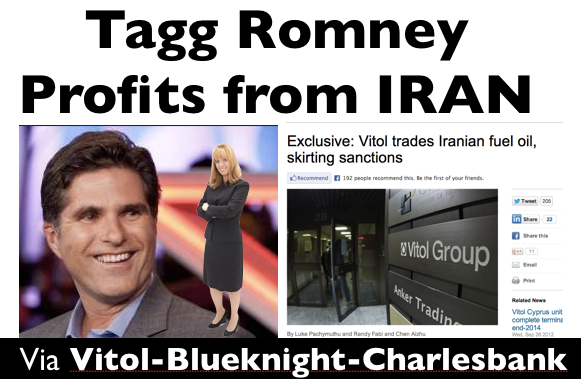 The Romney family Does Deals with IRAN Like the Haslam Family & Other Lockerbie Profiteers... The Lockerbie Cover Up Created a GLOBAL Good Ole Boy Network   THAT is Why They Jailed the Whistleblower (me) and THAT is WHY the Feds Should do a RICO Investigation.  Taxes Were NOT Paid By Those Connected to the Romney's, Haslam Family & NISSAN.  The recent cyber attack on my computer shows that "some are scared"… I'm scared too…..

I know you got the "GOODS"

Sal Russo of the Tea Party Express did communications for the Al D'amato campaign & was linked to the mafia that the CIA needed to sell the cocaine and the profits helped CIA "Freedom" projects.  Sal Russo is linked to current politicians that profit from IRAN.  Sal Russo led the "anyone but Romney" movement and the goal was "to get Romney"… He used the strategy "Failure for Power"…. Sal Russo stayed at an official Romney hotel in Tampa. 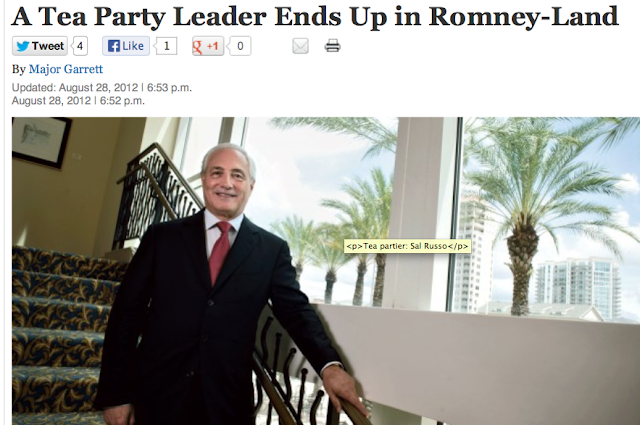 this is from a bio of Sal Russo:
Sal Russo is founder and strategist for the Tea Party Express.  Sal’s political interests began at the age of 19 when he worked for an actor with aspirations for the governorship of California.  Russo continued to work with Ronald Reagan when he became governor and through his presidency.  Russo and his firm, Russo Marsh has been at the forefront of some of the most prominent national, state and local campaigns, including the election of Governor George Deukmejian (1982), Senator Alfonse D’Amato, New York (1992), and Governor George Pataki, New York (1994). - See more at: http://billmartinezlive.com/sal-russo/#sthash.oSXPvpHC.dpuf 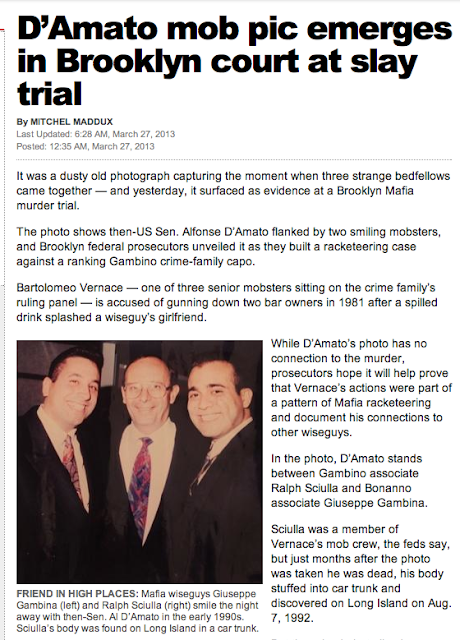 Above an article that has the former NY Senator with picture of mafia members.  The CIA needed the mafia in the 80's.  They sold the coke that funded the contras. I don't remember "who" I snorted coke with- so those people in Congress that are worried I'll "rat you out"… don't.  All my memories up until 88 are "fuzzy".. Besides back then doing coke was patriotic: like buying a box of girl scout cookies…right Sal?   I (Sharyn Bovat) did some of the research to restore Oliver North's image.  He was "just" doing what he was told.   The Giuliani people in 93 were a little skeptical of me and I KNEW why.  It was my link to Sal Russo.  Today Rudy Giuliani is one of my heroes.

FYI- I was told to quit snorting coke in late 86 or early 87 & to "get in" to the Federal Air Traffic Controllers academy. It was my understanding at that time that someone thought discrimination was happening.  Now I believe it was a way to keep me away from CIA operatives that were doing the drug & arms running. The summer after my return I attended the RNC convention in 1988.   There I was invited to a Nancy Reagan luncheon that was themed "Just Say No"… I got to sit at the same table as the Secretary of transportation. 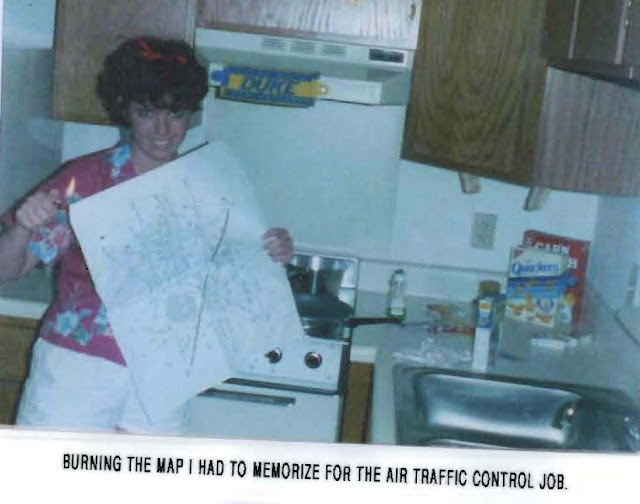 Heres a picture of me while living in Oklahoma City… I had to memorize this map I'm about to burn.. IT was a "tough" job.  Notice the mini DUKE banner on my stove vent… I was loyal to the people linked to Sal Russo.

Al D'mato was a member of the President's Commission on Aviation Security and Terrorism (PCAST), which was set up in September 1989 to review and report on aviation security policy in light of the sabotage of Pan Am Flight 103 on December 21, 1988.  My Uncle "led" the Aviation commissions for Reagan and Bush.  Iran did it… the cover up happened for National Security reasons.  The reason was IRAQ- the boys with the war toys needed a successful war to show off their weapons. Reagan's Peace Through Strength thing did not help ….   Peace created an opportunity for budget cuts. Did you know that every-time a bomb dropped a dod contractor got a 6 figure bonus?  Is that true with Drones too?   Anyway in the early 90's America needed the successful war to prove to Congress the need to keep Defense Spending…So we could not be mad at IRAN for the Lockerbie bombing because they were so close to Iraq and groundwork had been laid…. it was too late to start something with Iran.

Bottom line: All I know is that America needed a successful war and it was "my idea" to include the Vietnam Vets in the celebrations (parades).

Once Iraq was "free" the truth about Lockerbie was supposed to come out.  The Saudi's paid for the war and made us "stop" fighting before the troops got to Baghdad.  That pissed off a LOT of people in the military. The fact is President Bush had "no choice" based on deals done by his people.  Presidents make decisions based on "what their people tell them"…  I understand now that President Bush (H) wanted to get Saddam and it's more complicated than what I know.  My personal opinion is the Saudis wanted an embargo "just to keep the price of a barrel high"… & that is WHY we did not go to Baghdad.

In 1992 I was in the Middle East and one night my dinner companion was from Riyadh - he tried to get "frisky" I told him to his face "you might have paid for the war but you did not pay for me"….  I was later told by someone from the embassy that I was "rude"…  That pissed me off - my grandfather told me to NEVER sleep with a foreigner.  EVER!!!

Back to Lockerbie:  Some say the Lockerbie truth was supposed to come out in 95-  That is when the Brits took over the prosecution and it looks like after that Tony Blair made "deals"….  a man that "could be" innocent was jailed & I think he was "freed" because some know he's not guilty for ALL they said he did. I do NOT know what role if any Megrhai played- some say Megrahi was linked to the attack.

In December 1992 I did spent time in the Middle East while "housekeeping" was done prior to the Clinton arrivals. I  spent time with a man that was "most likely" the Palestinian money launderer that worked with the Iranian National guard. It's important to note that Iran "most likely" did it because of retaliation for a plane America "accidentally" shot down.  That happened in July 1988 and it was right before the election. BOTH Michael Dukakis and VP Bush decided to they did not want that story told. The Olympics were happening in Korea and America needed the incident with the Iranian plane silent.  People in the Middle East KNEW that Iran "had to do something"….

It's been said that CIA/DEA Whistleblowers were on the flight of Pan Am 103 and it's very possible that the organizers of the bombing helped "unethical" CIA destroy the evidence against them.  It's possible that the targets of the flight were ethical Intelligence Community members that wanted America to "clean up it's act"…. All this needs to be investigated.  I do not know the Lockerbie Truth. All I know is I was an unwilling participant of the cover up. Because of my DNA I got "stuck" in the Lockerbie mess.

FHI- A LOT of people were part of the cover up and MOST of them are rich.  I'm not wealthy because I was told to not accept gifts, jobs or marriage proposals from nations or individuals linked to those that assist terrorist nations.  I never did and Look what happened to me…..

Sharyn learned in 2011 that he has connected
to the Sal Russo people via Al D'amato.  Small World…. 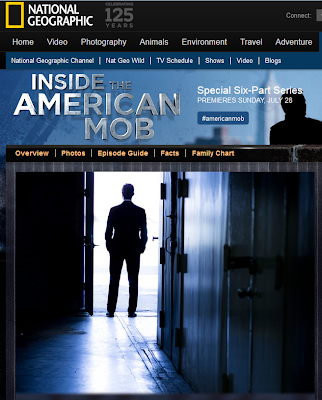 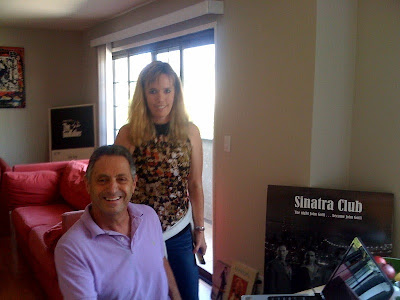 
I know you got the "GOODS"


We will have fun!

Can't wait for you to come out here.

Huffington Post-Jul 25, 2013
That is Salvatore Polisi's response when asked why people today are so fascinated with the mob. And, Polisi (right) should know. He spent 15 …

Sal Polisi is part of a National Geographic special about the mafia and how Rudy Giuliani "cleaned up NY"… I sure do wish Rudy could NOW clean up the GOP.

Below is from Sal's Simon and Shuster Bio:

Salvatore Polisi spent over fifteen years with organized crime families in New York. In 1986, he entered the Federal Witness Protection Program and never looked back. In exchange, he testified in a number of Mafia-related prosecutions. Sal's story is retold in the book Sins of the Father, written by Nick Taylor. No longer under federal witness protection, he has been featured in New York Magazine, Vanity Fair, the New York Times, Playboy, and London's YOUMagazine. Polisi has also been interviewed by Larry King, Connie Chung and Matt Lauer, just to name a few.

Polisi has been a frequent speaker for many Law Enforcement Agencies throughout the country and has spoken at school and universities on a wide range of topics including “Bullying.” He has spoken at US Justice Department conferences, police departments, colleges, and FBI workshops and he was the keynote speaker in Quantico at the FBI Academy's graduation ceremony for the class of 1989. He has been certified by the United States Federal Court in New York as a "crime expert" in the area of gambling, drugs, and organized crime.

Polisi has spent the last twenty years honing the art & craft of screen-writing. He has been blessed to have worked alongside Mardik Martin (Raging Bull), his mentor and friend. After a decade of hard work & tenacity, the vision of the completion of Sinatra Club the movie is a dream come true, and is now a book of the same title with the subtitle My Life Inside the New York Mafia.


I went to RUSSA in 1990- after the official Pan Am report came out saying drug trafficking was involved in the crash of Pan Am flight 103.  I was told that we had to "end communism" so Bush would not get the credit.  OMG!!! I believed everything I was told back then.....

Here's a missing bio of Sal Russo's from the web.... 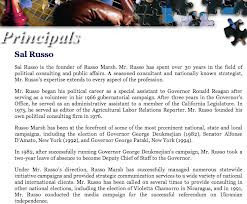 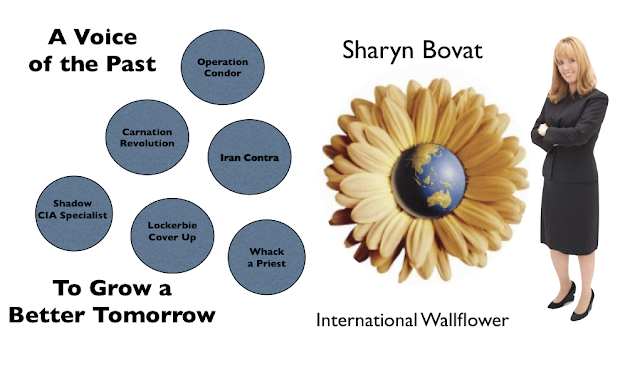 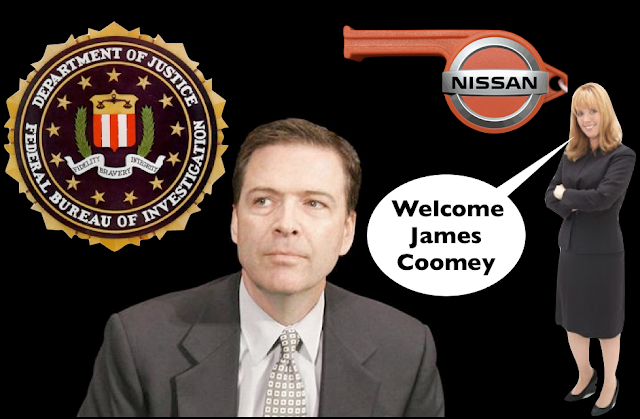