Reid Weingarten -Busy? Did You Hear about Tom Ingram's Client Getting Raided by the FBI & IRS ... NO I'm Not talking about HASLAM Again This Time it's Andrea Ball a Haslam Donor and Client of Tom Ingram Call HR Comp. They Should Check Out the "Hinkley" Deal To..They LIED About Some Insurance Certificate Things... 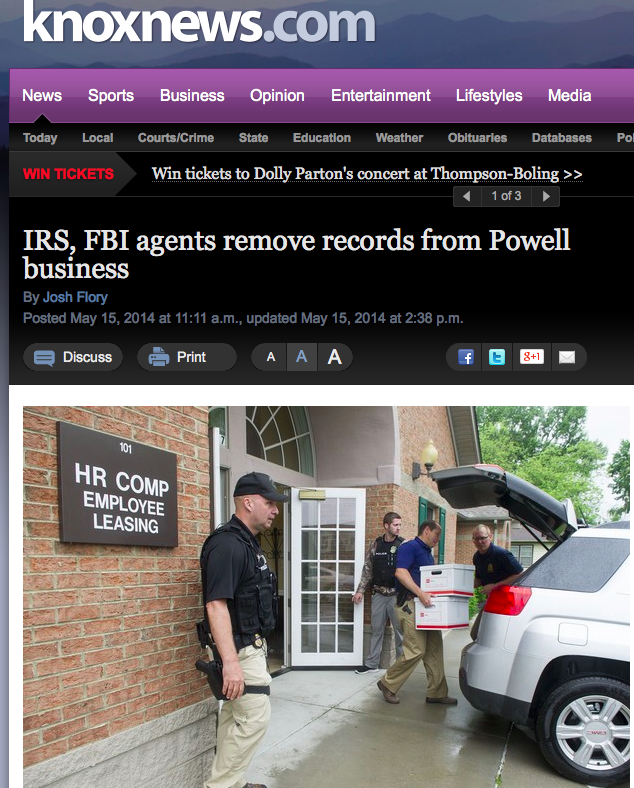 KNOXVILLE — Federal agents removed several boxes of records Thursday from a Powell business. Agents from the IRS Criminal Investigation Division as well as the FBI were involved in the operation. Susanne Lee, a special IRS agent, declined to give details about the investigation. Lee also declined to say who was being investigated, but a sign next to the door indicated HR Comp Employee Leasing was the tenant in the building.Two agents stood outside the front door Thursday morning and declined to let a reporter enter the office. Lobbyist Tom Ingram confirmed that his company works for HR Comp as a strategic consultant and does lobbying for the company. 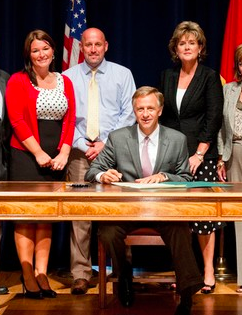 On this blog on Oct 13 I put that I told the FBI about HR comp.... It's good they got money for new agents cause their FINALLY doing something... Thank you Jesus!!!

haslamfbiirsraid.blogspot.com/.../james-comey-of-fbi-dod-whistleblower...
Oct 13, 2013 - James Comey of the FBI the DOD Whistleblower Feels Like a Ping Pong .... from a man who communicated an issue pertaining to HR comp.

When is Lamar Alexander & NISSAN execs gonna get BUSTED?

Did ya’ll know that “obstruction of justice is a CRIME”….  Kim helper you’ll look great in ORANGE.  When you led Terry Wood lie YOU set yourself up for criminal charges.  I’m gonna lobby to get my reputation back and until I do I’m fighting EVERY minute….

Why does Amy Burns NOT have her child back? Ava deserves to be with her mom.  I have the pictures of her bruises. I don’t want to post them cause i think it’s not appropriate BUTto have a little girl be with those that abused her is INHUMANE!!!!   The Tennessee courts MUST get cleaned up and it’s sad that Mike Catalano is retiring. He’s the ONLY court clerk that didn’t tamper with documents...

YES!!! I’m alleging it happened in Williamson County. Someone look at my files.  PLEASE Terry Wood the ADA must be stopped. I NOW have 2 more women that have come to me about judicial abuse-Both getting divorces from Good Ole Boys. The feds should do an audit of women jailed in Williamson County the last 5 years.  you’d be amazed.

FYI in 2010 I complained to Bruce Bateman of the Franklin Police cause they put me in a cell with a woman accused of assault with a lethal weapon who like the police terrorized me & when I started doing YOGA in the cell to calm down she asked the deputy if she could leave… she said I was too weird.   IT’s TRUE!!! & will be in my book that HUMILIATES Tennessee- I was the TOP relocation consultant used for NISSAN execs, Dell Execs, GM execs, Schneider Square D, & Dow Chemical & I’m jailed cause I whistle blew that TN had a Good Ole Boy network that discriminated.

You know “if” I leave the factual classified CIA crap out of the NISSAN Whistleblower story… it could go MAINSTREAM…:):)   maybe that’s HOW I’m gonna get my reputation NOBODY will buy NISSANs ….  women in management at NISSAN went from 20.9% in 2006 down to 10% in 2009 when I whistleblower.  After the move to TN from CA it was 14% a former NISSAN employee contacted me… he knew BUCKY Kahill (?) I got more data that could “rock” the auto industry.  Analyst were LIED to - Gays were discriminated against too

What company would relocate to a state that jails carpool moms that speak up for humanity?

Have a Great Day!

Good Ole Boys YOUR going down!!!  Tom Ingram “if” the feds come knocking I suggest YOU start talking:):)